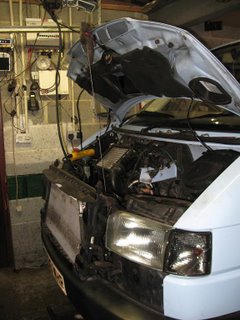 The other week I broke down with a loud squealing noise when I pressed the clutch pedal and some smoke under the van. Luckily I had some tools with me so I dropped the belly pan and was dismayed when I found some ball bearings in there but guessed the clutch release bearing must have disintegrated.

I phoned up a few VW specialists, two out of the three wouldn’t repair the clutch as they told me you need a special jig and the other would do the job but couldn’t fit me in for a few weeks. I decided to do the job myself even though I’d heard it was a bit of pig. I bought a new dual mass flywheel, clutch, pressure plate and hydraulic release bearing made by LUK. I then made a start, it soon dawned on me that it was going to be quite a big job as you have to do the following before you can remove the gearbox:

Once you have everything removed it is still quite difficult to remove the gearbox as you have to tilt the engine forward so the gearbox can clear the subframe. It took me about a day and half before I had the gearbox out. I then struggled for a while to fit the new flywheel until I released that a couple of the bolts are offset so it will only bolt back on one way!!!

It then took another day and half to refit everything. Unfortunately I’d disconnected the exhaust by removing the spring clips on the downpipe and these were impossible to refit without the special VW wedges or another special tool. I borrowed.

I hope I NEVER have to do this job again!!!

This is the offending hydraulic release bearing which had disintegrated 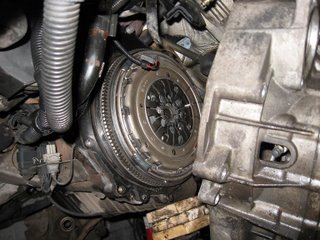 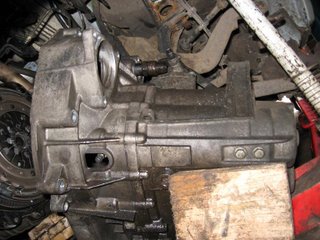